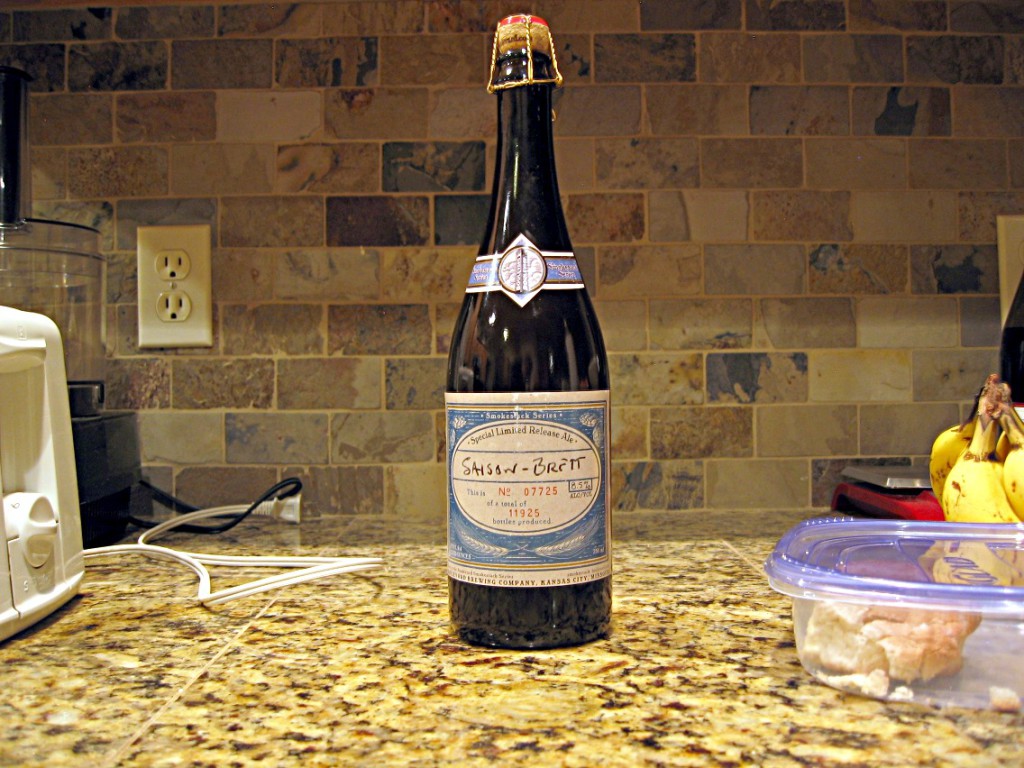 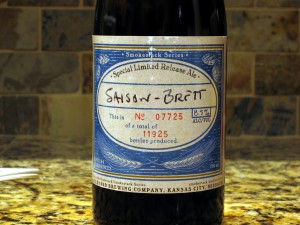 Over the holidays I had the distinct pleasure of getting my hands on Boulevard Brewing’s Saison-Brett from their Smokestack Series.  This beer was rated pretty high on BA and RB, so I didn’t mind dropping the cash on it.  It was the holidays, and I had been working my way through many imperials, stouts, and porters.  I was looking for something on the brighter side to shock my taste buds out from the dark roasted barley, wood, and bourbon shellacking they had been taking. I was a little worried about how much Brett “twang” was going to be in there, but this delicious Saison was definitely the beer I was looking for.

END_OF_DOCUMENT_TOKEN_TO_BE_REPLACED

New special beers have been put on at The Blacksmith, so get em before the kegs are blown.

One of the owners of The Blacksmith and I went over to the Bend Brewing Company for lunch a few weeks ago, and had the good fortune of getting to try their Imperial Pilsner while it was on tap.  This is such an enjoyable beer; I’m surprised I didn’t hear all the beer geeks I know in town talking about it.

Smooth … good bitter … great mouthfeel … excellent finish. It is surprising that this beer weighs in at 7.6% ABV (Alcohol by Volume) as it goes down very easily and is extremely refreshing for an imperial.  Hops and malt are both clean and flavorful. The darker-than-a-Pilsner color depth is most-likely due to the fact that there were a larger amount of sugars than a traditional Pilsner in the boil (thus, the higher ABV measure).  More sugars in the boil means more caramelization, and thus more color.

There’s only one keg of this at The Blacksmith, and I’m not sure how much Tonya has left at the BBC.  Come and get some of this while there’s still some to get.

While my wife and I were on a trip to Eugene to see Queens of the Stone Age … saviors of hard rock … we stopped off at a beer bar called The Bier Stein. While there I loaded up on Victory beers. I’d had their Prima Pils before and loved it. They had others including the Storm King which came highly recommended, so I picked up a few. I absolutely loved it, and now you can too.

Another hit from Victory.  This beer is big and roasty. It catches you off guard because it sure doesn’t go down like the big beer that it is. Weighing in at 9.1 ABV, it is full of smooth, creamy, roasty, chocolatey goodness. The hops are present and supporting, but not the star of the show. Great malt backbone, and clean finish. Would probably go great with ice cream or some chocolate.

I have a couple of friends who constantly haze me about my love of Belgian beers.  It’s probably because I made the mistake of taking them to Brouwer’s in Seattle and immediately ordered a large Cantillon Rosé de Gambrinus – a sour raspberry ale that make your lips pucker like Mick Jagger – for all to share.  After their looks of “how could you do that to me?!” fell off their faces, I became branded as the one who loved “Flambic Labiales”.  I have some very creative friends. 😐

So these same people found themselves at the pub yesterday, and called me saying that they were pouring a Belgian that they thought I would love.  It was a sour brown, and they thought it was pretty good.  I had traded emails with Larry at the brewery in the past, and he had let me know that they were doing a sour brown for their reserve series.  Since Deschutes regularly uses the pub as a proving ground for recipes as they’re being formulated, I figured this might be a preview of what they’re going for with Dissident.

I bellied up to the bar, and ordered the sour brown (can’t remember the moniker under which they were pouring it).  They pulled the handle, and it blew!  Sucks.  Luckily, someone at the pub went to the back and said that I had hurried down to try it.  They didn’t have any more, but they gave me the foam that poured out when they put the next beer on.   After it settled, I had a good 3-4 oz … enough to get a sense.  The color, aroma, and flavor were great.  I’m not usually a fan of the Belgian stabs I’ve had at Deschutes, but if the final product is like what I had last night, I’ll be so happy (and so slapping down some money for a case or two).  Great flavor … exactly in the ballpark of a sour brown.  It is a bit rough around the edges, but that’s to be expected.  My understanding is that this beer was straight out of the tank.  I was told it is going to go through some time on wood and some blending as well before it is ready.  With what I had last night as a base, this will indeed worthy of the Reserve Series pedigree.

So I was done with my teaser beer, and was ready for a full beer.  I looked up to see what replaced the blown Sour Brown keg … it was the Coffee Double Black which is an Imperial version of their Black Butte Porter.  I was told that this would be the next in their series of Anniversary bottlings in celebration of their 20th.  Epic win!  Two reserve series teasers in a row!  What I had last night didn’t have much head on it, but damn was it tasty … sweet, roasty, warming alcohol.  Very nice.

What a way to end a Monday!  Looking forward to the release party guys! 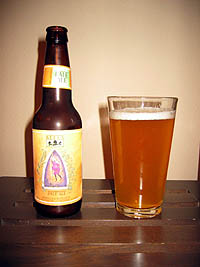 I wrote a post a while back about how pumped I was to see Newport Market representing the Alesmith beers. If you, dear reader, haven’t yet picked up, at the very least, a Speedway Stout, frankly I’m disappointed in you. Now go clean your room. Seriously these guys are a cut above the rest. Yes, it’s expensive at one bottle for $12.00. But believe it or not, that’s a pretty good deal, and as Jimmy from South Park would say to the Crips and Bloods, “Come on”. $12.00 is really no excuse for robbing yourself of a uniquely fantastic beer-drinking experience. This tasting is for one of their beers that I hadn’t tried before, so without further ado … the Grand Cru (insert poet/know it thought here). 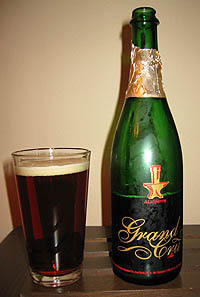 Appearance: Deep amber.  Tan, inch-high head that settles into a quarter-inch layer that stays for about a quarter of the glass.
Smell: Wow malt! Big malt and spices. Some yeast-ester aromas in there as well, but it’s toying with me … not clear as to what I’m picking up there.  Intriguing!
Taste: My palette just got slapped in the face!  Rich caramel malt flavors with ripe dark fruits of plumb and raisin.  Hints of chocolate in the finish.  It just keeps giving.  Can taste that classic Belgian candi sugar flavor as well butting up against the yeast.  Warming, moderate alcohol heat is supported by the huge malt backbone.  Smooth.
Mouthfeel: Rich with solid carbonation despite the 10% alcohol sweetness.
Drinkability: This is a big, boozy beer.  No kidding.  I spent a good amount of time with the one glass in the picture, and definitely wanted to share it with my wife.  Excellent beer.  Probably will buy another, and set it aside for a while to see how it cellars.  If you’re into big Grand Cru beers, definitely check this out.