Anyone who knows me or regularly reads this blog knows I received my all-grain equipment two months ago, and made big plans to brew a Belgian Witbier.  Two months later … where’s the f’n beer?!?!  Well, we hit summer here in the high desert of Central Oregon, and I didn’t have air conditioning. The fermentation temperatures would have been way too hot for doing what I wanted to do.  I wanted a clean, slightly-tart, Wit, and the house temperatures of around 80° F would have been way too hot for fermentation and conditioning. So I waited and started looking into ways to control the fermentation temperature.

My wife is at home during the day. She had finally had enough of the miserable house temperatures, so we pulled the trigger on air conditioning for the house. First of all, how the hell did it take us this long? It was getting to the point where it was so hot in the house that I was barely able to think (much less fire up the burners for a batch). Now the house is sitting at a very comfortable 72° – 73°. Sounds like the upper range of the idea temperature for many ale strains, no?

So I’m back in the game people. I’m going to formulate the recipe and slot the time to actually brew this week. I’ll post the plans when I have them.

I met some of the members of the Central Oregon Homebrewers Organization (COHO) here in Bend, Oregon over a year ago, and have meant to go check out a meeting for some time. Well, Wednesday was about damned time. I looked up when the meeting was going to take place, and they had it posted that it took place between 6:30 and 9:00. Unfortunately I had another meeting to make at 8:00, but figured some time would be better than none. Have to say it was a good time.

I drove up to the new Homebrew shop (which is at the old homebrew shop location on Division) which is a by-product of opened Tyler selling off that portion of the Silver Moon brewery’s business. I walked in to see a table set up with all kinds of things including ounce bags of hops, small bags of pre-measured grain, individual beers from Dick’s Brewing Company, and other items. I didn’t know it, but they were going to raffle this stuff off. Cool idea. There was pizza from Cibelli’s in the back and a bunch of different beers, some on tap … some in bottles that were within site. Everyone had a beer, and everyone was talking about anything and everything under the brewing sun. Gravity, brewing at altitude, IBUs, competitions, other homebrew clubs, previous trips, group brews … it was great.

I walked in, and several people came up to me and introduced themselves. They quickly directed me to the beers, where I started on my journey for the evening. This was my first homebrew club meeting ever, and it was like what I hear all homebrew club meetings are like in one regard: lots of homebrew. I had two different IPAs, a Rauch-Porter (no it wasn’t too smoky), a Belgian Strong, and a couple of different meads. Now that’s just what I had. Other choices were available, but I wanted to be coherent when I met up with my buddy at 8:00.

Their site had indicated that they were going to cover making a stir plate, and using it to make yeast starters. I know how to make a yeast starter, but I’ve really wanted to make a stir plate, so this was one of the topics that drew me in. I was kind of bummed that that didn’t take place in the time that I was there, and I don’t think that they covered it after I left. They hadn’t done the raffle yet, but who knows.

All in all everyone in the group appears to like one another. Like any group, there are people who are more outspoken than others, and that’s natural. It is good to see that no one is afraid to ask questions, and no one is afraid to be the sage providing the answer. I think that there’s definitely a knowledge dynamic present at homebrew clubs that presents numerous learning opportunities for its members.

It was a good time, and I’ll gladly attend another COHO meeting.

Sometimes the brew gods are on your side. The past 30 days has definitely been a stretch where they’ve been hooking me up in a big way. First, my birthday yielded several brewing books and the all-grain system that I’ve been wanting for a while. I brewed what I think will be a good IPA this month (waiting to pop the first one so that I can update the recipe). And now the July-August issue of Brew Your Own has hit a bulls-eye for what I’m focused on with my brewing.

As I mentioned in a recent post, I’m thinking about brewing a Witbier. I’ve pretty much decided that I’m going to do it. Unfortunately this style traditionally has a grain bill of around 50% unmalted wheat, and my new single infusion mash system is somewhat inadequate to convert that type of grain. I’ve been spending my time away from the site figuring out the recipe and how to pull off the mash (separate post, but one word … decoction).

In addition to thoughts about the next brew, I’ve also been realizing how bummed I’ve been with the initial performance of my starters. They always end up doing the job, but it takes quite a while to start up, and they’re rarely as lively a fermentation as I’d like them to be. I’ve read many articles about using stir plates for stepping up the reproduction rates of yeast in a starter to have a larger colony of yeast to pitch, but when I look at getting one, sticker shock keeps me in the smack-swell-pitch-swirl camp. I’ve also been honest enough to know that if I don’t have good instructions, I’m not going to build my own.

So when the new BYO came in the mail, I got the double whammy: an article on the style and recipe formulation of Witbiers, an article on how to build a stir plate, and an in-depth article on starters. What a score given what I’m working on. Thanks, BYO!

The days are getting hotter, and I have a brand new all grain system waiting to be christened. What to brew … what to brew? I’ve got two ideas for the inaugural beer that I want to explore here. Because of the growing heat, and because I miss the hell out of the original Celis White (I was born and raised in Texas), I’m inspired to get a nectar-licious Belgian Witbier going ASAP. It truly is difficult to beat the thirst-quenching flavor of the soft, light, citrusy flavors that make up a Belgian Witbier spiced with hints of corriander and orange peel. The only thing is, it has been a while since I’ve done all grain, and working with 45-50% wheat is a scary prospect (stuck mash from the high gluten) when I’ve never lautered with this system.

The other option is more emotional and less seasonal in inspiration. The Cloud Cover winter ale I just finished off was, in a word, awesome, but it was a partial mash interpretation. I was also not able to control the mash quite the way I wanted to. Getting an all grain recipe dialed back in for an all grain beer that I’ve been brewing now for years will be like coming back home. It would be a very appropriate beer to start back up with.

Fearing a stuck mash shouldn’t keep me away from a great summer thirst quencher, and a few handsful of rice hulls should be plenty of insurance. I think it’s going to come down to, what would be a pleasure to drink, and it’s going to be damn hot here again soon … especially when the beer’s finally done. Feel free to register a vote via comments. 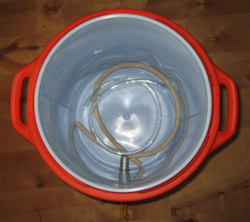 In the I-have-a-cool-wife category, I finally have the all-grain equipment that I’ve been wanting for a while now. My birthday was May 21st, and my wife hooked me up with the cash to finally get the infusion mash system that I wrote about a few posts ago. I knew that I wanted to get a 10 gallon Rubbermaid/Gott cooler system, but after a bit of researching, I realized that I didn’t have the patience to save myself 50 bucks by getting the pieces individually.

I searched around, and found the Deluxe All-Grain System at Northern Brewer. It features 10 gallon coolers, a stainless false bottom, and brass ball valves. It goes for about 200 bucks plus tax/shipping. If that’s a bit much, the 5 gallon version goes for 160.

I also received for my birthday a couple of recipes-worth of ingredients from Paul, a new Deschutes growler full of 20K Bourbon Imperial Porter from Jen, Extreme Brewing by Dogfish Head’s Sam Calagione from my in-laws. I think it’s safe to say that it was a beer-i-licious birthday. Thanks, again, you guys.

I’m probably going to do the Cloud Cover as the first beer to dial this system in. I’ll be sure to post about it as I go.

More pictures after the link.