This month’s session is all about the fruit beers, a topic near and dear to my heart.  Many people think the idea of fruit in beer is some sign of serious personality wussification.  I must admit that I get a bit disappointed by those people who roll their eyes when they hear a beer was made with fruit.  I feel this point of view, which I run into quite frequently, makes people miss the boat on many wonderfully complex beers of so many varied styles.  Luckily the guys over at Beer, Beats & Bites decided to allow us to revisit the topic.  My hope is that this Session will show the many different applications of fruits in beer.

I decided start off today’s entry while enjoying one of Dogfish Head’s creations, Black and Blue.  They describe it as a “Malt beverage fermented with black raspberry & blueberry puree”.  Yeaaaaaaah!  You can’t front on that! 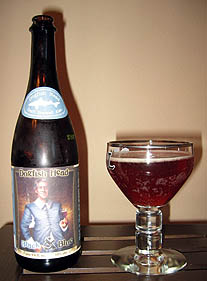 Appearance: Small off-white head that dissipates rapidly. Ruby hued amber with a bit of carbonation, but not too lively.
Smell: Fruit fruit and more fruit. Reminds me of the same big-fruit smell that comes off of a jam, but not too overwhelming.
Taste: Malt up front, and despite the aroma being so full of fruit, it takes a back seat to the malt flavor that hits you up front.  The flavors of blueberry and blackberry hit all together, but are distinctly discernable.  There are earthy notes of tobacco and spice that are accentuated by the big booze that is readily apparent in the finish.  It isn’t burning alcohol, but a warming alcohol that props up the big flavors found in this beer.  As it warms, the fruit comes forward more.  A bit of nice sour as well.
Mouthfeel: A bit of an oily mouthfeel, but does have a good long, satisfying finish.  Only slight carbonation.
Drinkability: I like this beer, but it is a bit challenging given all that is going on with the big fruit and big alcohol.  I would say that I will enjoy finishing the bottle as I finish up The Session that this tasting is for.

I think the problem most people have with fruit beers is that the ones they’ve tried have been too sweet.  For example, I’ve heard many complaints from people to whom I’ve served Lindeman’s Framboise saying that “it tastes like cough syrup”.  It’s that cloying, sweet, not-at-all-like-beer flavor that throws people off.  But a fruit beer doesn’t have to taste like a Jolly Rancher (unless that’s what you’re going for).  The fruit can be the star, co-star, or just a bit-player in the back.

For example, Cantillon’s Rosé de Gambrinus is made with raspberries. Microorganisms go ape shit on what would otherwise be a heavily fruit-flavored beer producing a sour, tart, beautifully colored, and a tasty, excellent example of its style.  The raspberries are there, but way under the tart and sour. Unibroue’s Éphémère Apple is a great example of a Wit flavored with green apples. It is tart, dry, not too sweet, and is just a bit sour. It is quite the refreshing beer in the summer time.

My Red Ass Brown is a brown ale that ferments out in the primary then is transferred onto 5-6 pounds of raspberries in the secondary where it sits for about 2-4 weeks. The yeast reactivates and chews through a lot of the new sugars introduced by the raspberries leaving behind a tartness that blends well into the nutty sweet brown ale backdrop. I love this beer for the transition from summer to fall.

So as you can see, fruit beers can be other things besides the sweet, cloying beers that some people come to think of when they hear “fruit beer”.  So don’t be afraid people. Branch out from your IPAs and Pilsners.  Use all colors of the beer palette, and feel the flavor of the fermenting fruit!