I know nothing of Port Townsend Brewing Company excepting the fact that it is in Port Townsend, WA (cool little town). This was another special delivery beer muled in from Seattle. Port Townsend’s site says this weighs in at 5.5% ABV, and is intended to, “Give your mouth a blast of hops with this unique crisp ale”. Let’s take a look.

Discosure: This has been sitting in my frige for about a month, so I can’t say that it is as fresh as it probably should be. 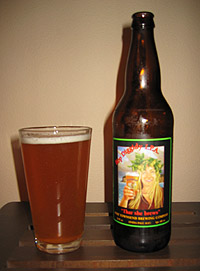 Appearance: Small, white head that settles to a surface covering rather quickly. Hazy straw-orange color with some … wow, this is definitely unfiltered. Plenty of tasty bits suspended in the beer.
Smell: Citrusy grapefruit on top of cotton candy. Some malt, but more sweet citrus than anything else. Nice.
Taste: Good bitterness present. I’m guessing this is so quickly aparent because the malt profile itself seems too understated. This really makes the bitterness hit quickly and take over. The finish is clean with almost no aftertaste.
Mouthfeel: Medium carbonation. It hits with an assertive hop bitterness and flavor, and is gone. Good, clean finish.
Drinkability: I liked it, and am glad I tried it. It isn’t the hit-you-over-the-head-on-all-fronts style of American IPAs that I’m used to. The malts could be more discernable and balanced, but only just a bit. This is a refreshingly crisp, hoppy IPA, and I wouldn’t want to mess with that by sweetening it up with a bunch of malt. Just could use only a touch more malt character.